PALFINGER lands a challenging order from the Netherlands Sea Rescue Institution Koninklijke Nederlandse Redding Maatschappij (KNRM) – the development of a new series of Rigid-Hulled Inflatable Boats (RHIBs). The official signing of the contract took place on January 20 at the PALFINGER production facility in Harderwijk, The Netherlands, where the boats will be constructed.

PALFINGER has been awarded a contract by the Dutch rescue organization Koninklijke Nederlandse Redding Maatschappij (KNRM) for twelve custom-built Rigid-Hulled Inflatable Boats (RHIBs), which will assist the organization during future rescue operations. The KNRM helps people in distress at sea more than 2,000 times a year, 24 hours a day. Currently, the rescue organization owns a total of 75 boats, which are crewed by 1,400 volunteers. The contract for the new PALFINGER boats was signed on January 20.

Designed for rescue operations in roughest sea conditions
Customized solutions are one of PALFINGER’s core competencies. Working closely together with the Dutch rescue organization, PALFINGER is developing a 7.5-meter-long, twin outboard aluminum RHIB. This is a completely new development, custom-built to meet all the needs of the customer. The boat will have room for three crew members and twelve rescued people. A robust hull construction and a wave-breaking bow design provide the necessary stability – even in the roughest sea conditions. Two Yamaha VMAX 115 hp 4-stroke engines give the lifeboat a speed of at least 32 knots.

Arnoud Straakenbroek, Sales Director Govermental & Professional boats and davits at PALFINGER, says: “Besides quality and safety, we will pay special attention in the development phase to improving ergonomics in order to minimize physical strain fatigue of the KNRM rescuers during use in these rough conditions. We are very much looking forward to the cooperation with the KNRM and at the same time proud that we can name this prestigious organization as a user of PALFINGER’s high-quality boats in our references.”

"For the KNRM, reliability, safety and quality of our equipment is very important because our rescuers voluntarily risk their lives for others. We are confident that with the 7.5 meter RHIB, which PALFINGER will produce, we offer our rescuers the best boat in this class,” says Jacob Tas, General Director of the KNRM.

The first RHIB is scheduled to leave the shipyard in Harderwijk at the end of 2022. The KNRM will intensively test the boat against the defined quality criteria. If the boat meets all expectations and is approved by the KNRM, PALFINGER will start building the remaining eleven boats. The last RHIB will be delivered in 2028. 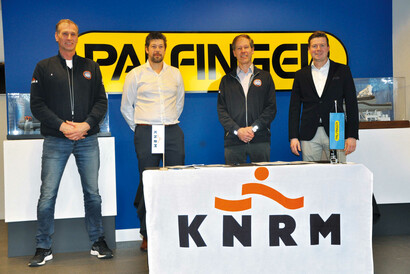 The international mechanical engineering company PALFINGER is the world's leading provider of innovative
crane and lifting solutions. As a global partner for pioneering and reliable deck equipment and lifesaving
appliances, PALFINGER MARINE supplies high-quality products to fulfill standardized and customized demands.
Supported worldwide by a network of experienced and skilled specialists, we provide flexible and efficient service
solutions. Our portfolio gives a competitive edge for customers in the maritime and offshore industry.

PALFINGER is an international technology and mechanical engineering company and the world's leading producer and provider of innovative crane and lifting solutions. With around 12,600 employees, 34 locations and a worldwide sales and service network of around 5,000 service points, PALFINGER creates added value from the challenges of its customers. PALFINGER is consistently continuing on its course as a provider of innovative, complete solutions that deliver increased efficiency and better operability, while leveraging the potential of digitization along the entire production and value chain.

PALFINGER AG has been listed on the Vienna stock exchange since 1999, and in 2021 achieved record revenue of EUR 1.84 billion.