OceanX recently launched a new, one-of-a-kind scientific research, media production, and exploration vessel – the OceanXplorer. With a range of tailor-made equipment, PALFINGER’s marine business is one of the major suppliers onboard the world´s most advanced research vessel.

It is all about the knuckle boom A-frame. “Our skilled engineers worked closely with the OceanX team so that all demanding requirements for handling their submersibles was met”, recalls Sverre Mowinckel-Nilsen, Sales Director of PALFINGER’s marine and handling solutions, the development of a 40T knuckle boom A-frame tailor designed for launch and recovery of OceanX’s Nadir and Neptune.

To ensure best handling of these two Triton submersibles as well as the autonomous free-swimming Remus, OceanX relies on solutions provided by PALFINGER.

The most advanced A-Frame

“In beginning of 2016 we were contacted by the OceanX team inviting us to design a state-of -the-art launch & recovery system for their submersibles to be used onboard”, says Sverre Mowinckel-Nilsen. The result has ended up being the most advanced A-frame ever installed onboard a scientific research vessel. Having an SWL of 40T, 20T in personnel lift modus, has given a A-frame covering all requirements from OceanX both now and for the future. The knuckle boom A-frame design provides a working area far better than any other conventional A-frame design, especially based on being able to reach fully into deck for service and maintenance.

To comply the A-frame delivery, PALFINGER has also delivered a 10T towing winch for use to tow the submersibles during recovery operations and a 10T Active Heave Compensated (AHC) emergency recovery winch. The AHC winch is capable of working down to 1,500-meter (4920 feet) water depths and will be used to recover the submersibles in case of emergency. For general cargo handling onboard PALFINGER delivered a 30T knuckle boom offshore crane.

“Working closely with the OceanX team for this project has been a great pleasure. They know what they want, they just needed to find a supplier which could make the impossible possible”, says Mowinckel-Nilsen. Right now, the R/V OceanXplorer is on its maiden voyage to the Red Sea to study the global-warming-resistant super corals to be found in the region.

Even though mankind has landed on the Moon and sent missions to Mars and other planets, the great unknown next door is right here, on Earth. It is the oceans of which 80% are still unmapped. Life below the seas surface remains almost as alien to us as the dark side of the Moon.

OceanX – a team of researchers, scientists and filmmakers – found new species, captured the first-ever footage of the elusive giant squid in its deepwater home and were the first to explore the deep ocean around Antarctica taking a sub 1,000 meters down. To continue their work and documentaries, a one-time petroleum support and survey ship has been completely retrofitted at Damen Shiprepair in the Netherlands into the most advanced exploration, research and media vessel ever built, the R/V OceanXplorer.

To get an impact of the OceanXplorer click here. 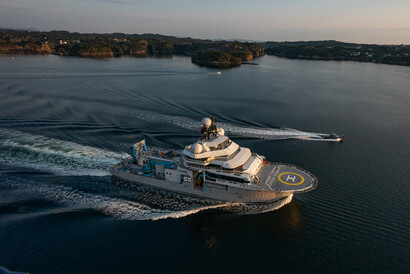 As a global partner for innovative and reliable deck equipment and lifesaving appliances, PALFINGER's marine business supplies high-quality products to fulfill standardized and customized demands. Supported worldwide by a network of experienced and skilled specialists, we provide flexible and efficient service solutions. Our portfolio gives a competitive edge for customers in the maritime and offshore industry.

The international mechanical engineering firm of PALFINGER is the global leader for innovative crane and lifting solutions. With a workforce of approximately 10,800, 34 manufacturing sites and a worldwide network of dealerships and service centers at over 5,000 locations, PALFINGER is always close to the customer.

As the leader in its engineering field, the company aims to ensure its partners’ business success in the long term by providing solutions and products that remain economically and ecologically viable in the future. Its broad product and model portfolio allow PALFINGER to take digitalization and the deployment of artificial intelligence to new levels.

As a global company with strong roots in its home region, PALFINGER is convinced that thinking and acting in the interest of sustainability plays a vital role in successful business operations. That is why the company assumes social, ecological and economic responsibility along the entire value chain.

PALFINGER AG has been listed on the Vienna Stock Exchange since 1999 and in 2020 achieved a revenue of EUR 1.53 billion.